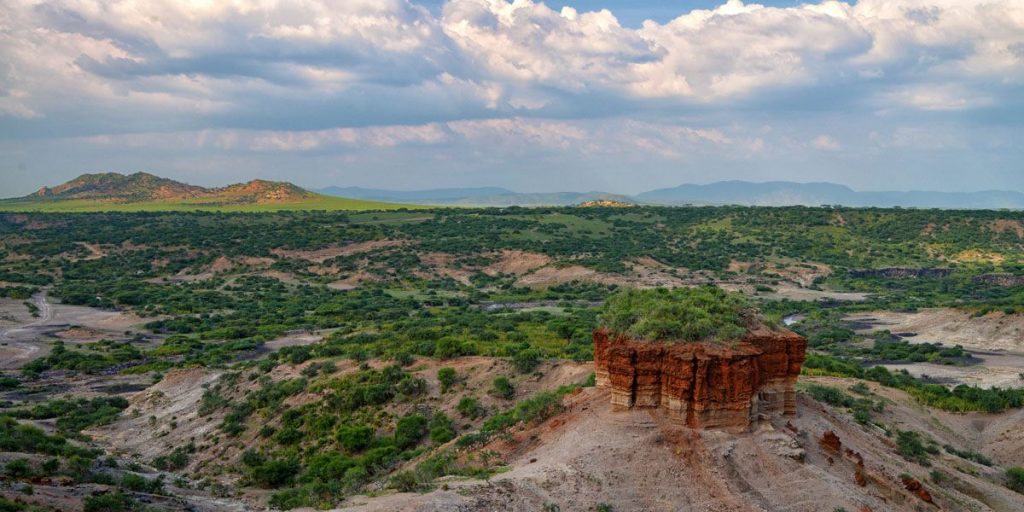 Located in the Ngorongoro Crater Conservation Area, Olduvai Gorge is a steep-sided ravine of approximately 50 km (30 miles) in length and 90 m (300 ft) deep, at its deepest point. Locals use the Masai word ‘oldupai’ which is the word for the wild sisal plant that grows in the ravine.

The time span of objects unearthed at the site date from as old as 2,100,000 years to 15,000 years ago. The fossil remains of more than 60 hominids have been found here. The most famous fossil is 1.8 million year old skull Australopithecus boisei, or commonly referred to as zinjanthropus. This fossil was discovered by British archaeologist Mary Leakey in 1959.
More recent discoveries (1970s and onwards) have yielded many skull and teeth remains, with over 500 pieces of fossil bones and teeth excavated. The famed ‘Lucy’ skeleton was discovered in 1974 by Donald Johnson.

There is a small museum at Olduvai Gorge. At certain times of the year it is also possible to go down into the gorge to see the excavation area. There are also Masai villages nearby and a visit to one of them can be arranged. We highly recommend a visit to a local Masai village for those who enjoy portrait photography. It is always recommended to ask a local first, before taking their photo. Most will be very grateful for a few dollars tip for their time and cooperation.

An Olduvai Gorge visit can easily be combined when at Ngorongoro Crater.